The children will be going on an exciting trip to The Bank of England to discover how money is stored and disseminated around the country and around the world by the Banking System.

The children will also learn how to reflect on the cost of living and the everyday items they use.

Here is our curriculum leaflet for this term

2/5/18 - We have been practicing trade in our groups, well done to our winners!

12/3/18 - Our new student has been learning English digits

12/2/18 - We played a version of 'Who wants to be a millionaire?' based on the digestive system

7/2/18 - We have been representing the length of the large intestine.

10/11/17 We have been practising for our class assembly

17/10/17-We have been creating formulas for maths week

10/10/17 - We have been practicing Harvest Festival themed plays 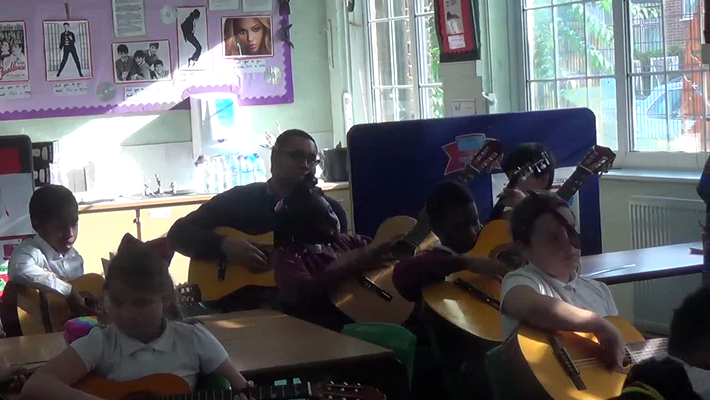 See how our guitar skills are developing.

We did a series of games in PE based on Monty Python's Silly Olympics.

25/9/17-We have been recreating Pacman as part of our entertainment topic in P.E.

16/9/17-We watched an historical football game and make comparisons to the sport today.

15/9/17 We have been experimenting with circuits in Science

We watched a clip of Monty Python's 'Ministry of Silly Walks' as part of our focus on movement in PE.

Leon and the Place Between

“I don’t believe in magic,” said Tom, as he settled on the grass in the show tent. Around him the crowd waited impatiently for something to happen. “It’s not real,” hissed Pete. “It’s only tricks.” Little Mo looked disappointed. “Shhh now,” whispered their brother Leon. “It will be magic. You have to believe. “Look, it’s going to begin.”

The lanterns went out. In the darkness the crowd fidgeted with excitement. There was a cough, a whisper and then a loud hush. At last a soft, blue glow lit the stage and the curtains twitched. With a ripple of gold braid…the curtains slowly parted…. Bang! Three jugglers tumbled onto the stage to the pounding beat of a drum. Skittles flew, fast and furious, back and forth, up and over. Tambourines rattled, loud and louder; skittles spun, high and higher; the jugglers twisted, fast and faster. Then bang the skittles went up… but they didn’t come down! Everyone cheered and clapped. The jugglers bowed and bounced away. Once more they was only darkness.

Now one dim spotlight found a barrel organ, still and silent on the stage. Everyone held their breath. The handle began to turn but there was no hand upon it. Note by note the tinkling song of the carousel started to dance from the pipes…up jumped a barrel organ monkey, all made of wood and tiny hinges. He beckoned the moon to light the mechanical toys… A red-eyed crocodile snapped at a running boy’s heel. A ballerina turned on her pink satin shoe. Painted animals paraded into ark and a flying machine lurched through the air, up, up and over the moon.

At last the barrel organ fell silent. No one stirred. For a moment the tiny creaks of the mechanical toys cast their own spell: Then they slowed, jerked awkwardly and were still. The solemn monkey took a stiff bow and the curtains closed to loud applause. “Now “  said Leon, edging forward in the dark. “Now it’s going to happen.” Outside in the night an owl hooted. With a swish the curtain opened…

Pouff!  A cloud of purple smoke filled the stage and there he was…Abdul Kazam! Sparks flew from his fingertips. Leon could smell the magic. “Trust nothing…” said Abdul Kazam. “But believe everything!” He threw his arms into the air and the magic began. Paper flowers blossomed from his sleeves; silk scarves changed colour at a whispered word; water, poured into a hat, turned into night air. Bright white handkerchiefs became fluttering doves. The crowd was amazed. Then Abdul Kazam stepped aside and there was a door. A door into a box. “Who will step into the magic?” Leon knew it had to be him. He stepped up to the stage and climbed into the box. There was a gasp from little Mo and the door shut behind him.

Inside, the box was not a box. It was a world of doorways to somewhere else. Leon fell down, down, down, until he tumbled onto a carpet. “Hello,” said a boy in blue pantaloons trousers. “Where am I?” asked Leon. “This is the place between,” said the boy.  “ Between what?” “Between there and back again. This is the place magic sends you.” “Will you show me ?” asked Leon . The boy smiled.    “Hold on tight.” He gave the carpet a tug. With a swoop, off they flew. Everything that disappeared by magic, appeared in the place between. Cards and doves fluttered in the lantern light. Coins and rings spun fast, flashed and were gone. Ropes, cups and balls danced in the perfumed air. A magician’s assistant stepped out of nowhere as another vanished in the blink of an eye! It was a world of astonishment. A world of the unexpected. It was alive with magic.

The carpet came to rest. “Do you live here?” asked Leon, his eyes huge with wonder. “No,” said the boy. “But my father is a great magician. He makes me disappear every night. If I help him he will teach me magic.” Then Leon felt something soft wriggling behind him. A white rabbit climbed gently onto Leon’s lap and nestled in his arms. The boy stroked her ears. ”She is always here,” he said sadly. “She was never called back”.

Leon hugged the lonely rabbit and gazed around the place between, enchanted and amazed. Suddenly, the boy began to float away. “My father is calling,” he said.” It is time to go.” Leon waved.  “Goodbye” he cried. “I’ll never forget!” Then, from far away, he heard an echo of his own name. “Leon, come back to us. Leon, return…” Leon felt the magic lift him off the ground and back into darkness.

Leon heard a sharp tap. The door of the box opened before him. Leon stepped out with the white rabbit still in his arms. Abdul Kazam took a majestic bow. The crowd cheered and clapped. Tom and Little Mo clapped loudest of all.” Did you really disappear?” asked Pete as they shuffled out into the night. “Of course he did,” said Tom.” See, this is a magic rabbit.” He stroked her long, soft ears. “But where did you go?” asked Little Mo. Leon smiled “ I went to the place that magic takes you,” he said. “Can anyone go there?” sighed Little Mo with a yawn. Leon lifted her up onto his shoulders. “Yes, anyone Mo,” he said, “Anyone who believes.”

Unfortunately not the ones with chocolate chips.

Some cookies are necessary in order to make this website function correctly. These are set by default and whilst you can block or delete them by changing your browser settings, some functionality such as being able to log in to the website will not work if you do this. The necessary cookies set on this website are as follows:

Cookies that are not necessary to make the website work, but which enable additional functionality, can also be set. By default these cookies are disabled, but you can choose to enable them below: